IS FORCED ARBITRATION RIGHT FOR MY BUSINESS?

We at the Nevada Association of Employers have been providing Nevada companies with guidance on conflict resolution since 1938. Workplace conflicts and disputes between employers and their employees take many forms. Additionally, consumer facing businesses must consider how to resolve disputes between employees and the public. Nevada businesses are considering the ethical and legal ramifications of forced arbitration versus engaging the public court system. In this article we discuss what forced arbitration is, the pros and cons of forced arbitration and the resources Nevada employers have to aid them in defining their policies.

What Is Forced Arbitration? 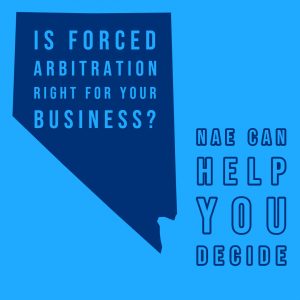 According to Galen Sherwin of the ACLU Women’s Rights Project, “Arbitration contracts are agreements to bring any future legal dispute through a private system rather than through the public courts.”

In May 2018, the Supreme Court ruled that workers may not engage in class action lawsuits against their employers in cases where the employees first signed forced arbitration clauses. The ruling limits the ability of workers to collectively litigate against discriminatory labor practices and accusations of harassment or abuse. Forced arbitration can also be listed as a condition of buying a product or service.

Recent conflicts where employee or consumer rights were waived due to forced arbitration include: sexual assault allegations, harassment allegations and overtime disputes. Many other types of conflicts may incite the desire of employees or consumers to seek class action legal measures.

The Benefits and Points of Contention Surrounding Forced Arbitration

Single employees and consumers often lack the financial resources to litigate against employers or purveyors of products and services. Many hold that legal action brought forth by a group has a higher probability of a favorable outcome than when brought by an individual.

Some contend that through forced arbitration, organizations hold the upper hand when it comes to “procedural protections afforded by the justice system,” (Sherwin). She goes on to say that forced arbitration causes employees and consumers to miss out on their case being heard by a judge and jury of peers. Instead, the arbitrators are most often a panel of attorneys that are not required to follow legal precedent.

Disputes decided by arbitration are often ruled upon much faster than when decided by the public court system.

The speed of conflict resolution is just one factor that employers must think about. Nevada employers must also consider their reputations and public image when compelling employees and consumers to agree to forced arbitration as a condition of employment or in the terms of purchase for a product or service.

Companies such as Uber and Lyft took heat from the media and the public because their forced arbitration policies were said to be impeding justice for alleged victims of sexual assault and harassment. These companies have since done away with forced arbitration in cases of sexual assault and harassment, but they retained the policy for other types of disputes.

Forced arbitration is not a one-size-fits-all policy for Nevada employers. Whether a particular company would benefit from such a policy should be carefully considered.

After joining NAE, we will walk you through the ins and outs of forced arbitration. We’ll also help you address any other concerns you may have about your company’s policies. Click here for a list of the many benefits afforded by membership with NAE.

The policies that govern your business are of the highest importance, and you don’t need to make those decisions alone. Give us a call at (775) 329-4241, and we’ll work with you to develop a set of policies that will make you, your employees and your customers proud.

Do you know all your obligations as a Nevada employer? The Nevada Association of Employers (NAE) is here to help. Our staff of HR professionals is equipped with the knowledge and experience to assist employers in navigating the often-complex world of employment-related statutes and regulations. Contact NAE today!

For more information about NAE and what we do for Nevada employers, visit our website. If you are a Nevada employer interested in membership, please contact membership@nevadaemployers.org or join today!